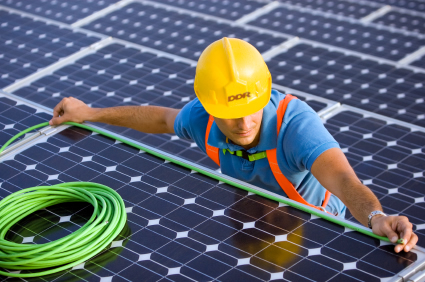 New York, U.S.A., 19 May 2015 – More than 7.7 million people worldwide are now employed by the renewable energy industry, according to a new report released today by the International Renewable Energy Agency (IRENA). This is an 18 per cent increase from last year’s figure of 6.5 million. The report, Renewable Energy and Jobs – Annual Review 2015, also provides a first-ever global estimate of the number of jobs supported by large hydropower, with a conservative estimate of an additional 1.5 million direct jobs worldwide.

As in previous years, renewable energy employment is shaped by regional shifts, industry realignments, growing competition and advances in technologies and manufacturing processes. Jobs in the renewable energy sector are increasingly being created in Asia, with five of the 10 countries with the most renewable energy jobs now located in the region (China, India, Indonesia, Japan, and Bangladesh). As a result, even with continued jobs growth, the European Union and the United States now represent 25 per cent of global renewable energy jobs, compared to 31 per cent in 2012.

– Solar PV is the largest renewable energy employer with 2.5 million jobs worldwide, up from 2.3 million at last count.
– Wind employment passed the one million jobs mark, up from 834,000 at last count.
– Liquid biofuels (roughly 1.8 million, up from 1.45 million), modern biomass (822,000, up from 782,000) and biogas (381,000, up from 264,000) are also major employers, with jobs concentrated in feedstock supply.
– China is the world’s largest renewable energy employer with 3.4 million jobs. China leads global employment in solar PV, wind, solar heating and cooling, small and large hydropower, biomass and biogas.
– Brazil is the leading employer in biofuels with 845,000 jobs. Its wind industry is also growing rapidly with employment increasing 12 per cent to 35,800 from last count. Wind power capacity has expanded from one GW in 2010 to nearly six GW in 2014 and could reach 16.5 GW in 2019.
– In the United States, total solar employment surged 22 per cent from 142,700 to 173,800 and overall wind jobs increased 43 per cent since last count to 73,000. Data also finds that employment of women in the solar industry is on the rise, increasing from 26,700 to 37,500.
– In India, if the government reaches its goal of installing 100 GW of solar PV and 60 GW of wind, it will generate more than 1 million jobs by 2022.
– Germany is the leading renewable energy employer in Europe with 371,400 jobs. German wind capacity expanded 5.3 GW in 2014, the second highest addition after China.
– France saw a job reduction of 4 per cent since last count, but still leads Europe in biomass, ground source heat pumps and biofuels employment.