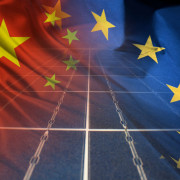 Brussels, 5 July. Today 34 solar and renewable energy organisations sent a letter to Commissioner Malmstrom calling on the European Commission to end punitive trade measures on Chinese solar panels and cells. The organisations, representing over 1.3 million European jobs and more than 120,000 European companies, believe that the measures are having a negative impact on the solar sector in Europe.

James Watson, CEO of SolarPower Europe, stated ‘This is an overwhelming show of support from organisations across the EU working in solar. The measures have been in place for more than 3 years without any real benefit to the European solar industry. We need a better, more specific approach to support module producers in Europe, trade measures are a blunt instrument harming more than 80% of solar manufacturing jobs and all downstream jobs in Europe today. The Commission needs to develop a new way forward for solar without trade duties and price mechanisms.’

The Commission must make a recommendation on the solar trade measures at the beginning of 2017, which is subject to approval from the Member States. Trade duties have been in place since 2013, alongside a minimum import price agreement.